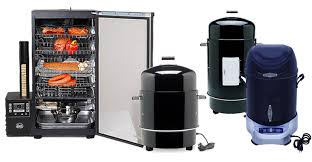 Smoking is the process of cooking or rather preserving food in which the food is placed over the smoke arising from the burning wooden chips for extended duration of time. This smoke heats the food which is usually hanged on top of the burning wood or placed over it. The process of smoking has been in practice since centuries and was earlier widely used to preserve certain food items like meat, beef, salmon, chicken, and etc. However, with the rise of chemical industry man learnt better ways to preserve food including the non vegetarian foods, by using chemical preservatives. With the time the practice to smoke food to preserve them declined. However, by certain activists who considered chemical preservation as not a natural method, initiated to revive the smoking industry and the present the smoking industry is once again blooming like never before.

These days one can easily find packed meat and beefs including salmon and chicken which are packed after being smoked and are ready to eat. The food items which are commonly smoked include meat, fish, cheese and certain vegetables. Sometimes, the boiled hardened egg and ingredients used to make beverages such as beer and smoked beers are also smoked before they fermented. It is believed that smoking the ingredients of a beverage before fermenting it adds a unique taste and flavor to the drink being prepared. 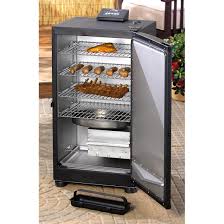 With the need of smoking food just to preserve it being eliminated, most of the professional still smoke the food just for its unique flavor. The smoking was traditionally done over certain woods like alder. However the oak wood is also widely used nowadays. It has been known for years that the flavor and taste of the food being smoked depends on the type of the wood used. With the ease of access to fuel woods increasing men across globe have experimented with choice of other woods to smoke the food. Apart from oak and alder, wood form conifers and fruit woods like apple woods are now commonly used. Not only this, these woods are sometimes also burned along with other flavoring agents like some spice or some root or bark with essence of flavour. The variety of the smoked food and its flavors thus has been widely experimented with and the result is that smoked foods have now become all time favorite of almost all the group of people.

The smoking was traditionally done by lighting the fire, but with the advent of modern science, it has been replaced by smokers. The smokers are designed machines containing a smoking chamber and a separate chamber to place or hang the food to be smoked. This has facilitated the smoking process and thus given us enough time and liberty to easily experiment with the smoking process. With the discovery of various types of smoker, smoking the food has never been so easy. One now has to arrange just the wood to be used in the combustion chamber and carry the smoker along to his/her desired place to smoke. This has ensured that smoking foods is no longer a hectic process where one needed to collect the wood, prepare the bone fire and then burn the food and wait for it to be smoked, while continuously monitoring it. Smoking food has now become almost ash free and much cleaner to use. The ash from the wood used is often collected in the combustion chamber and can be easily disposed later on. This has also popularized the smoking process and made it a common house hold activity. 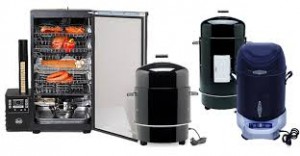 Several types of smokers are available in the market. These include charcoal smokers, electric smokers, upright drum smokers, commercial smokers, vertical water smoker, propane smoker, smoke boxes, etc. The smokers are generally classified based on the shape of the smoker and the method used to ignite and keep the wood burning.

Electric smokers offer an advantage to these two conventional type of smokers and come in various shapes and sizes suitable for both family and commercial use. An electric smoker uses electricity as fuel. The electric coil is used to heat the wood, the smoke from which is allowed to pass to the smoking chamber where the food to be smoked is placed. Modern day electric smokers come in various shapes and may also house a chamber to store water, which produces steam, as in vapour smokers. The steam in vapour smokers is used to control the water content of the meat of the beef being smoked.

The important features of the electric smokers include the temperature and time control functions. The rheostats or thermostats are used in an electric smoker to keep the temperature relatively constant. It can also be programmed to beep or stop or cool down after certain time interval and thus eliminates the need to be continuously monitored. This has made smoking food relatively easier task and allows even beginners to prepare great smoked foods. An electric smoker also has a caveat to allow extra stem or smoke to flow out and thus ensures that food is rightly grilled.